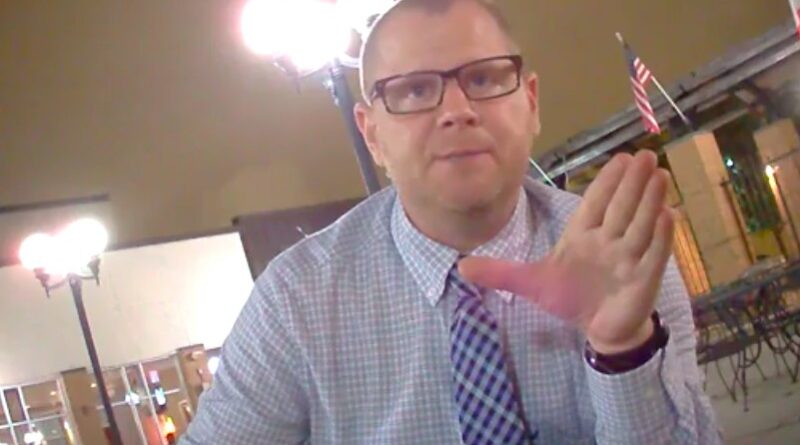 Democrats have used trained provocateurs to instigate violence at Republican events nationwide throughout the 2016 election cycle, including at several Donald Trump rallies, using a tactic called “bird-dogging,” according to a new video investigation released Monday by James O’Keefe’s Project Veritas.

The goal of “bird-dogging”: to create a sense of “anarchy” around Donald Trump that would undermine his political support. Often, the tactic uses the most vulnerable people — including the elderly and disabled — to maximize shock value.

O’Keefe’s extensive video investigation reveals that the Hillary Clinton campaign and the Democratic National Committee (DNC) are involved in “bird-dogging” and other provocative tactics through a web of consultants led by Robert Creamer, a veteran Chicago activist and convicted felon who is thought to have planned Democrats’ political strategy during the push for Obamacare in 2009 and 2010.

Creamer is also the co-founder of Democracy Partners, a consulting group that, according to Project Veritas videos, apparently contracts directly with the Hillary Clinton campaign and the DNC, and that works with an array of super PACs and consultants to organize, film and publicize their provocations.

Creamer affirms on one video that Clinton is aware of “all” of his work, and that Democracy Partners has a daily telephone call with the Clinton campaign to coordinate efforts.

O’Keefe and his team also obtained hidden camera videos showing one of Creamer’s consultants, Scott Foval, describing “bird-dogging,” among other tactics, and taking credit for having instigated violence at several Republican events during the 2016 election cycle.

Foval — who praises Creamer as “diabolical” — explains how “bird-dogging” works: how they plan confrontations in advance, choose particular individuals to provoke, and maximize media coverage.

FOVAL: So one of the things we do is we stage very authentic grassroots protests right in their faces at their own events. Like, we infiltrate. And then we get it on tape. And then, when our guys get beat up —

PV: So like — progressive, what we saw in Madison.

FOVAL: We train up our people, wherever they are, to — and I work with a network of groups, we train them up on how to get themselves into a situation on tape, on camera, that we can use later.

PV: So some of this, so I probably know your work.

FOVAL: I know you do. Everybody does. But —

FOVAL: You remember the Iowa State Fair thing where Scott Walker grabbed the sign out of the dude’s hand and then the dude gets kind of roughed up right in front of the stage right there on camera?

FOVAL: That was all us. The guy that got roughed up is my counterpart, who works for Bob [Creamer].

PV: And so you, like leant yourselves to that situation and it happened. A self-fulfilling prophecy.

FOVAL: And then the reporters had people to talk to.

Foval also tells Project Veritas’s undercover journalist that Republicans are less adept at such tactics because they obey rules: “They have fewer guys willing to step out on the line for what they believe in. … There is a level of adherence to rules on the other side that only when you’re at the very highest level, do you get over.”

In another video, Foval admits that his organization is responsible for an incident in Asheville, North Carolina in September, where an elderly woman was allegedly assaulted outside a Trump rally.

In that incident, the 69-year-old woman, wearing an oxygen tank, heckled a visually impaired 73-year-old Trump supporter, then pursued him. She claimed he then punched her in the jaw, though she had no visible injury; his attorney claims she touched him on the shoulder first, and then fell to the ground as he turned around. The national media covered her claims widely, while largely ignoring his. Foval explains that the woman had been “trained” as a part of his operation.

Foval also explains how the operation is set up to allow the DNC and the Clinton campaign “plausible deniability” in the event that the true nature of the deliberate violence is discovered: “The thing that we have to watch is making sure there’s a double-blind between the actual campaign and the actual DNC and what we’re doing. There’s a double-blind there, so that they can plausibly deny that they heard anything about it.”

In another video, Foval notes that the Clinton campaign and the DNC are involved, through a chain of contracts: “We are contracted directly with the DNC and the campaign. I am contracted to [Robert Creamer] but I answer to the head of special events for the DNC and the head of special events and political for the campaign. Through Bob. We have certain people who do not get to talk to them, at all.”

He explains that Democracy Partners then provides material from the field to the campaign, the DNC, and a wide array of left-wing super PACs and organizations involved in the 2016 election effort:

We have a clip deliverable that we have to deliver every day for our groups of clients who are involved in this project: AUFC; A4C, which is Alliance for Change; Alliance for Retired Americans, which is part of AFL-CIO — they’re one of our partners on the AUFC stuff … Depends on the issue. And then there’s the DNC, and the campaigns, and Priorities [USA]. Priorities is a big part of this, too. The campaigns and DNC cannot coordinate with Priorities, but I guaran-damn-tee you that the people who run the Super PACs all talk to each other, and we and a few other people are the hubs of that communication.

He also explains how the campaign and the super PACs use consultants as intermediaries for communication, since federal law prevents them from coordinating directly. He calls the system the “Pony Express,” linking the DNC through Robert Creamer, through Robert Creamer to Foval, and through Foval to Brad Woodhouse’s super-PAC, Americans United for Change:

FOVAL: We’re consultants, so we’re not the official entity. And so those conversations can be had between consultants who are working for different parts. That’s why there’s Bob, who’s the primary there, and I’m a sub to him. And I’m also a primary to AUFC separately, that’s why.

PV: So there’s like a Morse code between the DNC and that Super PACs.And you guys —

FOVAL: It’s less of a Morse code than it is a text conversation that never ends. It’s like that. It’s kind of like an ongoing “Pony Express.” It’s not as official as it could be, but that’s because the law doesn’t allow it to be.

The videos obtained by O’Keefe and Project Veritas corroborate earlier evidence of a Democratic plan to use violent imagery against the Trump campaign. A DNC PowerPoint presentation from April released by Wikileaks includes a plan to cite “incidents of violence” to create the “desired perception” that “Trump is dangerous and divisive, undermining our values and putting our security at risk.”

The “bird-dogging” carried out by Creamer and others would appear to be part of that effort.

In one hidden camera video, filmed at Creamer’s Washington, D.C. office, Creamer explains that Hillary Clinton is aware of “all” of his activities, directly or indirectly, and that Democracy Partners has a daily conference call with the Clinton campaign, as well as frequent calls with the White House.

Wikileaks reveals that at least one “bird-dogging” operation was approved directly by Robby Mook, Hillary Clinton’s campaign manager. In an email dated July 4, 2015, Mook approved a plan “to bird dog” Donald Trump, meaning specifically to infiltrate volunteers into his campaign events and ask him questions about immigration.

Trump supporters have frequently been the victims of real, as opposed to staged, violence.

In June, for instance, Trump supporters leaving a rally in San Jose were attacked, beaten and chased by left-wing mobs. One woman was pelted with eggs in full view of the national media. The mayor of San Jose blamed Trump for the violence.

Last week, Hillary Clinton supporters attacked a man carrying a sign that read “Bill Clinton is a Rapist” at rally in Las Vegas hosted by the Carpenters Union.

Creamer, who is married to Rep. Jan Schakowsky (D-IL), is a Saul Alinsky acolyte who trained many of the key political figures in the Chicago clique that surrounds Barack Obama. He went to prison in 2006-7 for a check-kiting scheme, but was hired by Obama to train volunteers for his 2008 presidential campaign.

In 2011, Creamer opened Democracy Partners together with other veteran left-wing organizers, including Heather Booth. Creamer’s occasional columns at the Huffington Post also provide talking points to left-wing activists throughout the country, and are circulated among key Democratic staff.

(Full disclosure: the author ran against Schakowsky for Congress in 2010).

Joel B. Pollak is Senior Editor-at-Large at Breitbart News. His new book, See No Evil: 19 Hard Truths the Left Can’t Handle, is available from Regnery through Amazon. Follow him on Twitter at @joelpollak.