One of the freed migrant rapists (left) thought his identity was safe with his undercover police escort (right).

A gang of 5 Muslim migrants brutally raped a wheelchair-bound woman for hours, forcing their handicapped victim to suffer through the most debauched torture imaginable. Just days after police arrested the rapists, however, they were released without any charges for one unbelievably sick reason.

Sweden was shocked when national headlines revealed that a handicapped woman in her 30s was overtaken by a group of at least 5 men who had forced their way into her house over the weekend in Visby. Aftonbladet reports that the woman shared a taxi with one of the men on a ride home from the pub before the suspect asked to use her restroom. It was after she let him in that his friends burst into the home and took turns raping her for several hours.

Thanks to legislation pushed by leftists to prevent the media from publishing the identities of vile criminals like these men, Swedish newspapers have only been allowed to circulate blurred images and nondescript details. However, an anonymous source pointed Mad World News to a video that captures 3 of the rapists.

As expected, these men are Muslim migrants, which is exactly why the leftist officials running the country are doing everything in their power to protect them.

What’s even more sickening is that all 5 of these men were released just as quickly as they were arrested. After detaining the men, prosecutor Mats Mihlborg explained that there was no “probable cause” that they had committed any crime.

This was because authorities do not believe there was “violence or threats,” which are the legal defining aspects of what Sweden considers rape, according to Fria Tider. Of course, it’s obvious that a gang of 5 men can easily overpower a handicapped woman without so-called violence or threats. Because of this technicality, however, they walked free Wednesday evening.

Fortunately, word travels fast in Visby, and the people there are fed up with the liberal agenda. The locals heard that the authorities were working overtime to protect the identities and livelihood of the attackers, personally escorting them from the police station to their homes. In response, around 100 angry Swedes stormed the Visby police department to demand that the men be exposed and charged.

A second rapist was caught on film, which Mad World News has enhanced.

The unidentified cameraman only managed to capture the third rapist’s profile.

Hela Gotland reports that dozens of outraged citizens united to protest the protection of the rapists, an action that is illegal if the gatherers aren’t given a permit. It was during this protest that one brave civilian managed to record 3 of the rapists’ faces with his cell phone before risking arrest by uploading the footage to social media.

“You are fucking scum! Okay? Fucking scum is what you are!” says the man in the video. “Leave this country, dirty animals!”

The new law restricting the right of access to details regarding criminal suspects was officially implemented on October 1. It’s nothing more than another step towards handing the country over to its Islamic enemies. Thankfully, the cameraman didn’t care about this new law and is successfully plastering these scumbags’ faces all over the internet.

Under Sharia law, there is no freedom of the press, speech, expression, or religion. Everything from dress to social media is heavily monitored for offenders guilty of insulting Islam. Since everything that disagrees with the Quran, Hadith, and Muslim clerics is an insult to Islam, even preaching a different religion that contradicts what Islam teaches is considered blasphemy, which is punishable by death.

Of course, leftists still seem to think that extending tolerance and respect is enough to magically melt the hearts of these 7th-century Muhammadans and make them see the light of progressive liberalism. Unfortunately, they only see this as the weakness they can exploit for the furthering of their own intolerant laws and ideology. 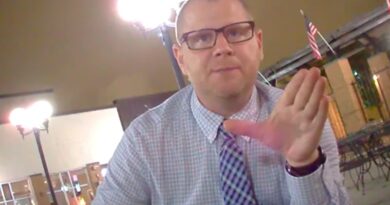