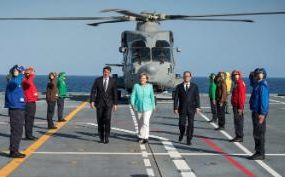 EU summit: Europe ‘must work closer on defence’ after Brexit

Matteo Renzi, Francois Hollande and Angela Merkel arrive on board the Italian aicraft carrier Giuseppe Garibaldi for their summit on the island of Venotene

The EU must sharply increase cooperation on defence and intelligence to combat Islamic terrorism and other threats, the leaders of France, Germany and Italy said, as they insisted that they were not disheartened by Britain’s historic decision to leave the bloc.

Standing on the deck of a huge Italian aircraft carrier, the Giuseppe Garibaldi, Francois Hollande, Angela Merkel and Matteo Renzi acknowledged that Europe faced the forces of “disintegration” and grave threats, including terrorist attacks, the war in Syria and the migration crisis.

It was a highly symbolic venue – the Garibaldi is coordinating the EU’s migrant rescue operation in the Mediterranean, amid fears that Islamist terrorists could enter Europe by passing themselves off as refugees.

The German chancellor, who is known to back deeper EU defence plans, called for more sharing of information between European intelligence services to thwart the kind of attacks that have hit her country, France and Belgium.

“We feel that faced with Islamist terrorism and in light of the civil war in Syria, that we need to do more for our internal and external security,” Mrs Merkel said.  EU countries needed to continue to cooperate in their fight against the smuggling of migrants across the Mediterranean and to protect Europe’s external borders.

President Hollande also called for greater cooperation on defence, as France comes to terms with a string of terrorist attacks in recent months.  “Europe must ensure its own defence, and France is certainly playing its role,” the French leader said.

“I also insisted on defence, because we want to ensure that there is greater co-ordination there, extra means and forces.”  Plans to press ahead with a so-called “EU army” will be easier now that the UK has decided to leave the bloc, a former head of the Italian military said.

General Vincenzo Camporini, former chief of the general staff, said the British thwarted a common defence policy for Europe years.  “Every step forward was blocked [by the British].

The British position was crucial – everyone knew that without London, you couldn’t even begin to talk about a common European defence policy,” he told La Repubblica newspaper.

Mr Renzi echoed the call for deeper defences, while adding that Europe would not suffer from Britain’s departure as many had predicted after the June 23 vote to leave.

“Many people felt that after Brexit Europe would come to an end, but that is not the case,” he said, “We respect the choice made by the British citizens,  but at the same time we want to be able to turn the page on a new future.”

Ahead of the first significant post-Brexit meeting for EU leaders, Mrs Merkel and President Hollande were greeted by an Italian guard of honour when they flew into Naples on Monday.

Together with the Italian prime minister they then flew by helicopter to the tiny volcanic island of Ventotene, where political prisoners interned by Mussolini during the Second World War hatched the dream of a united, federalist Europe.

The three leaders placed three bouquets of blue and yellow flowers – the colours of the European Union – on the white marble tombstone of Altiero Spinelli, one of the interned intellectuals who envisioned a Europe without nationalism and war.

The summit on board the Garibaldi was an opportunity for the three leaders to thrash out their positions on Brexit and other pressing issues ahead of a summit of the 27 remaining EU states in Bratislava next month.

Analysts said that the focus on defence and security reflected the inability of ‘core’ Europe to agree on fundamental questions over the Euro and how to revive the continent’s stagnant economy.

Mujtaba Rahman, managing director for Europe at the Eurasia group, the global risk consultancy, said that the show of unity among the big three post-Brexit European powers leaders concealed intractable differences over the direction of the continent’s economic policy

“The French and Italians both want something Mrs Merkel cannot deliver – for the French, it’s more economic integration for the Eurozone and for the Italians want more flexibility to tax and spend – but she will only pay lip service to these demands,” he added. 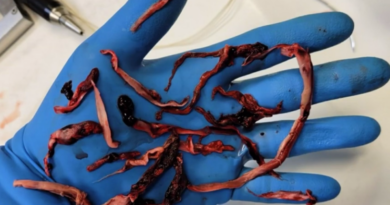 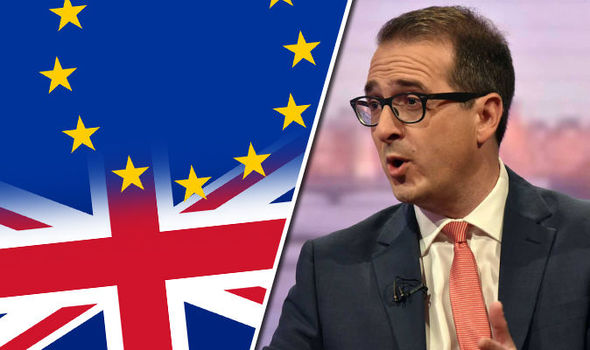